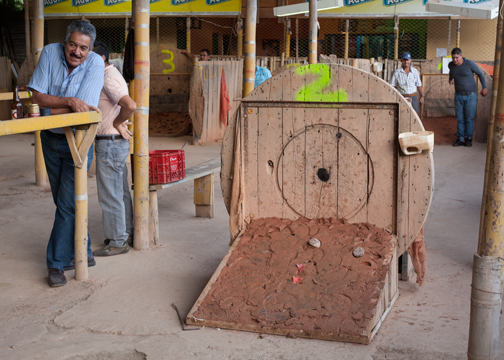 Tejo is underappreciated by the youth of Colombia. This great national sport combines throwing heavy objects with explosions and alcohol. That description alone should be persuasive enough. However, on a Saturday night, the tejo court in Minitas was filled with elderly men and crates of empty beer bottles.

While it was not the demographic I was expecting, the elderly tejo aficionados were very welcoming and answered all our questions. It was obvious that they knew what they were talking about because they played on a full court and their throws were very accurate. The sound of a gunshot frequently rang out from their lanes.

The first thing we realized was that there was no hourly cost to play. Instead we were expected to be ordering alcohol, as tejo and drinking go hand in hand. This was easily accomplished with a half crate of beer, a small bottle of rum, and two bottles of Coke. We were then given a xeroxed scorecard from page 90 of the The Practical Manual for Native Sports while our court was prepared. 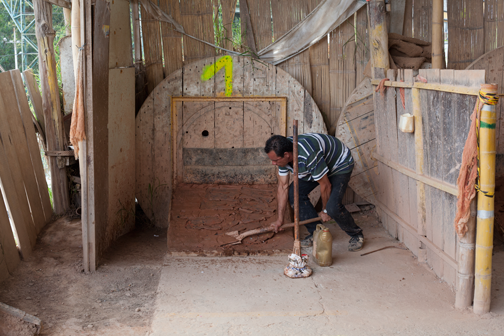 A tejo court has two wedges of clay at either end and both were moistened with water before their top layer was loosened up with a shovel. When the clay was smooth, two red triangular packets of gunpowder were plucked out of a plastic milk jug tacked to the wall. These packets were placed on the almost imperceptible lip of a metal pipe that was in the center of the wedge.

Each player throws their own metal disk (tejo). Once everyone had thrown in one direction, the points are tallied, the tejos yanked out of the clay, and everyone aims for the wedge at the other end of the court.

There are four ways to score points: the closest tejo to the center scores one point (manos), exploding a packet of powder is three points (mecha), landing the tejo in the center is six points (embocinada), while exploding the packet and landing in the middle is nine points (monona).

A mecha might only be three points- but it felt like hitting the lottery. As soon as the tejo made contact, there was the crack of a gunshot and then a bursting flame. I jumped every time one went off.

For the regulars, our game was both a source of humor and an opportunity for instruction. 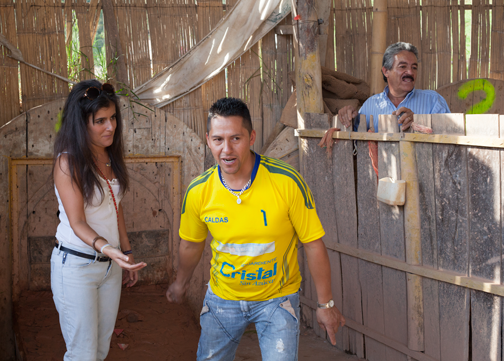 Maybe the reason why the youth aren’t crazy about tejo is that it’s not a glamorous sport. We didn’t wear our nicest clothes because everything was covered in a layer of red dust. When the sun began to set, a man walked over to our court with a bamboo ladder in one hand and a light bulb in the other. 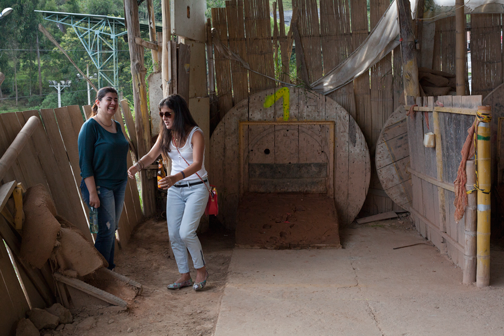 Then, about halfway into the game, I realized that the little sink to the left of our target our target was actually a urinal. When people were using it, it was a bit of a distraction. 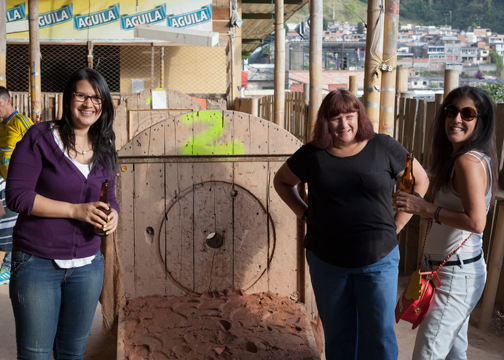 Truth be told, I had been feeling a bit depressed all week about leaving my 20s. But after celebrating my 30th birthday with tejo, I realized there is still a lot of cool stuff ahead.

Forget bingo- when I’m 80 I want to be drinking with my friends, throwing tejos, and exploding stuff. I also expect to be good enough the use the full court by then.

How to get to the tejo cancha in Minitas: Take a taxi or buseta to the intersection of Calle 63 and Carrera 11c. The entrance to the tejo court is on Calle 63, just up the hill from a Virgin Mary shrine. 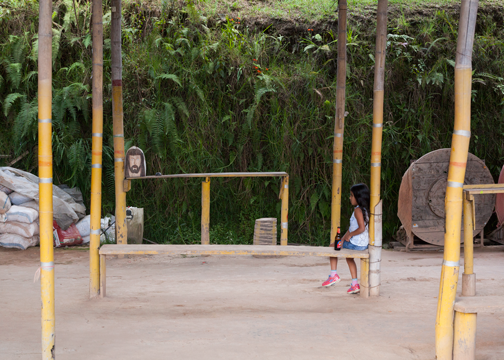