If the architect Edward Blore completely had it his way, the servants would have had this view.

That’s what happens when you dispatch architectural plans from London without knowing much about the location’s geography. Unfortunately for the succeeding servants, this oversight was changed at the last minute. When Governor Sir George Gipps first took up residence inside the Elizabethan Gothic estate in 1845, his view was undoubtedly gorgeous.

Not every miscalculation was fixed though. Blore’s original design called for a vaulted double-story open porch as the main entrance. While great on paper, the direction of the layout wasn’t very compatible with Sydney’s wind patterns. It became a wind tunnel that must have bustled a lot of skirts and ruined quite a few fancy hairstyles until it was enclosed and the covered carriageway was added in 1873.

That would have been the end of the story except that the newly enclosed space (with the flags flying off the turrets) had the worst echo. It was a feature I noticed when my guide spent a lengthy period of time covering the history of the building. The echo was so bad the she had to ask one of the guests to stop translating her speech because the sound of multiple voices bouncing off the walls was too distracting. 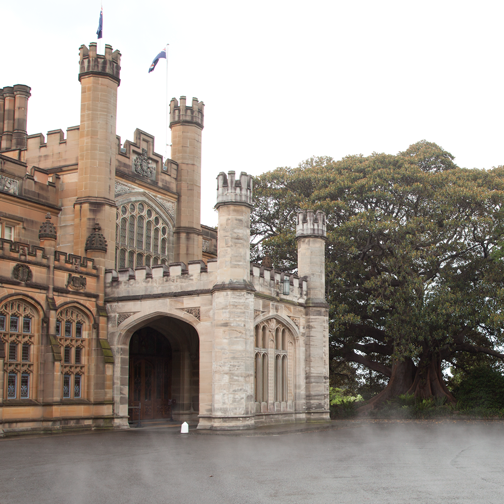 Despite being the live-in residence of the Governor, the downstairs is open for free tours on Fridays, Saturdays, and Sundays. The interesting part of the tour, at least the part that keeps the guides on their toes, is that furniture periodically changes according to the whims and tastes of the current occupant.

As the tour was more about details like ballroom’s stenciled imitation damask, the role of the governor was only briefly touched upon. From what I grasped the Governor is the Queen’s representative in NSW and their role is largely ceremonial, as required by the state’s constitution. 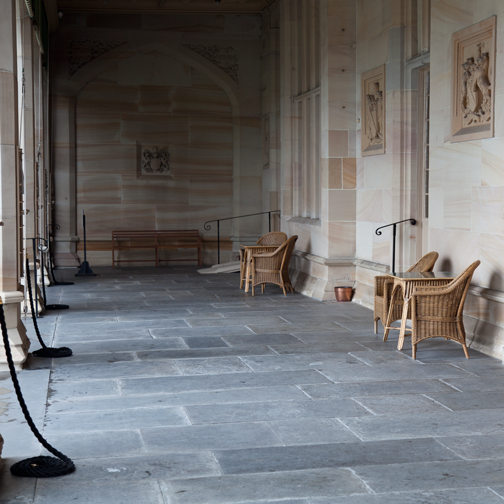 The whole idea of the Queen of England still needing an official representative felt a bit antiquated. However I often forget Australia is part of the Commonwealth and while the Government House is no Buckingham Palace, the outdoor arcade probably has a better view. I definitely wouldn’t mind being invited to one of the many private functions held at the Government House. A cocktail and a view of the harbor would go down very well indeed. 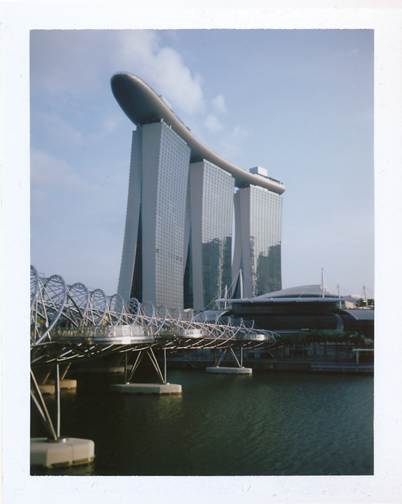 Barret grabbed the railing above his head as the train picked up speed. The Circle Line to Bayfront was an air-conditioned bubble packed full of locals and tourists. Aside from the announcements, there was also a route map on the wall which Barret used to track our progress.

“Only six more stops to go,” he whispered as he leaned in my direction.

“Six more stops,” Barret repeated, but I still wasn’t paying attention. A pungent odor had drifted my way and I needed to find the source. “Hey…” I cautiously began. “Did you put any deodorant on?”

“Nope. I didn’t have time.” This declaration made Barret feel proud. It was the same kind of conflicted pride that people get when they videotape their kids redecorating the kitchen with a bag of flour. It’s a disaster, but it’s also a very well executed disaster that could go viral.

“Funny how that always happens right before we go somewhere humid.”

“Yeaaaah.” It was too late to turn back to Changi Airport, where we had left our luggage for the day. “Just keep your arms down.”

Singapore is hot and muggy all year, but that doesn’t deter tourists. Respite from the temperature can be found at Gardens by the Bay. Two separate UK firms designed the massive gardens which only recently opened to the public in late 2011.

The main attractions are the two conservatories and the Supertree Grove. Barret and I visited the gardens on the only Monday in September that the Cloud Forest conservatory was closed for maintenance, so it was an easy decision to visit the Flower Dome instead. 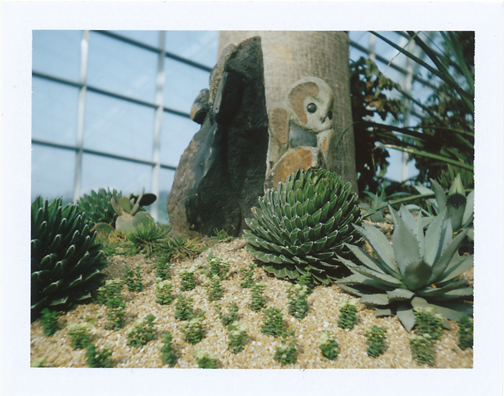 The garden was a beautiful mixture of plants from all over the world. There was everything from succulents and orchids to kangaroo paws. 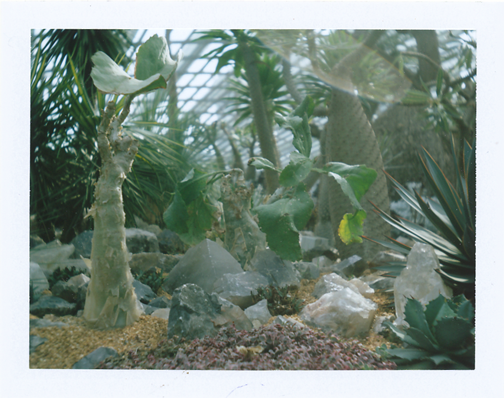 One part of the South American display had a small crystal garden, another part had an anatomically correct cactus covered in white hairs. It was called Old Man of the Mountain.

The conservatory dome arched way above the multilevel grounds and through the glass we could see the harbor and Singapore skyline.

After spending a few hours in the Flower dome, we walked through the outdoor gardens to the Supertree Grove. This main grove has eleven fuchsia tree structures which perform a variety of functions. Some of the trees harvest solar energy and others serve as ‘air exhaust receptacles’ for the conservatories. From 9am-9pm a canopy walkway is open and at night the structures are illuminated for a synchronized light display. 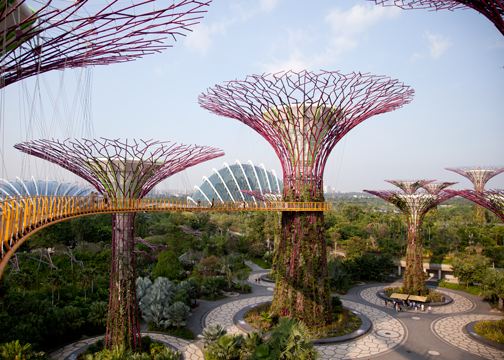 An hour or two before sunset, Barret and I walked back to the bay to get a look at the Marina Bay Sands. It was a stunning hotel from the outside, but it was even more airy and delicate inside. From the lobby, the structure reminded me of a delicately balanced house of cards.

From there we walked along the bay, past the flower-shaped ArtScience Musuem, and across Helix Bridge. There were several promontories along the route with great views looking back at the Marina Bay Sands. 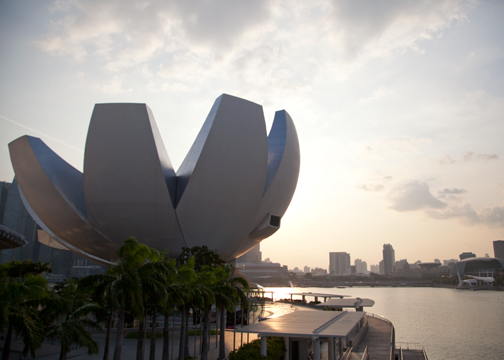 We continued walking past joggers and stroller-pushers, the people who come out for the beautiful night breeze. An amateur photography group set up on the sidewalk to capture the highrise buildings and the bay.

Our visit was just a taster of what Singapore has to offer. We wanted more time to explore the colonial neighborhoods and the vibrant Little India, but we had a plane to catch and Changi Airport had an excellent shower hire facility. There was no way we were going to miss that before our international flight. No way at all.

How to get to the Marina Bay Sands: MRT Bayfront Station

It might have only been a short distance from the retail shops on Lambton Quay, but as the cable car made its first stop at Talavera Terrace, Barret and I were suddenly transported to a quiet hillside suburb filled with green gardens.

I have been thinking about how to describe the Botanic Gardens, but I am sure you have already seen some form of vegetation in your life. Just imagine what that looks like, multiply it, and don’t forget to include beautiful weather. It just happened to be one of those rare sunny Wellingtonian days that motivate people to go outdoors and enjoy the lush green winter foliage. Truthfully, it is a little difficult to find something to write about when everything went according to plan.

We set up our meal amongst the thorny spindles of a cactus garden because it felt vaguely reminiscent of home and shared swigs from a water bottle filled with sauvignon blanc. Our food was delicious and surprisingly enough I didn’t drop any of it on myself. Once again the stars had aligned and there was nothing disastrous to report- except… a barefoot woman tiptoed past us, supported by the arm of her date. I know, right? After lunch we stumbled out of the cacti garden and followed the winding path down the hill. 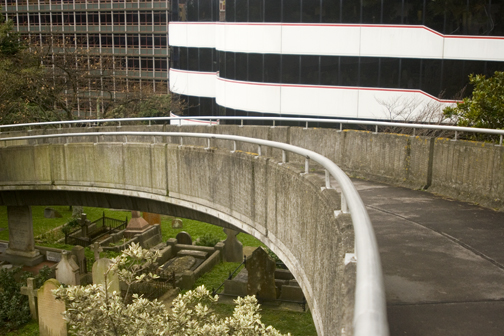 The last garden we passed through before reaching city center was the Bolton Street Memorial park; an old cemetery for the early Wellington colony. The weather-worn marble tombstones were sprouting soft tufts of green moss and looked completely out of place straddling a busy highway.

By the time we reached the end of a pedestrian bridge the alcohol had worn off and I was thinking about my new job starting the following morning. Since we were in the vicinity, Barret and I walked past the building and counted up ten floors to where my desk was waiting for me. It might not be interesting to write about days that run smoothly, but I really hoped Monday morning would be as unexceptional and well-run as our picnic.

How to get to the Botanic Gardens:

There are many entrances to the Garden including from Glenmore Street, Salamanca Road, Upland Road and the Cable Car. The only public vehicle access is through Centennial entrance on Glenmore Street.

The line runs between Cable Car Lane (near Lambton Quay & Grey St) and the Botanic Gardens (at the end of Upland Road).