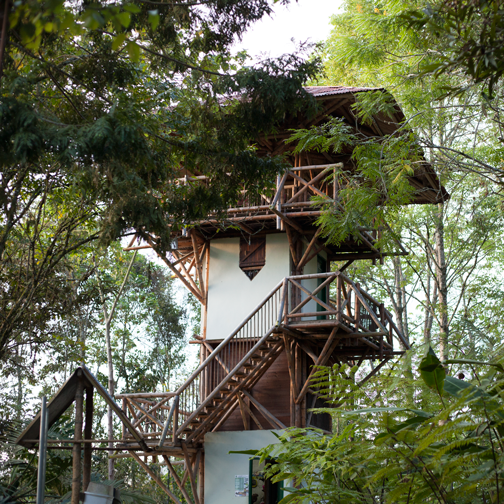 The entrance to Ecoparque Regional Alcázares-Arenillo was hidden at the end of a neighborhood cul-de-sac. Of all the nature reserves in Manizales, this one is one of the quieter ones.

A large bamboo tower stood close to the entrance and contained two small rooms where the park wardens lived. At the very top was a platform with pleather chairs and a beautiful view of the valley below.

Every now and then the park hosts paranormal nights, and this was the reason my friends and I visited the park after work on a Monday. After watching the sunset we moved towards the growing pile of firewood. Twenty-somethings began arriving with motorcycle helmets in hand and many of them had also brought bags of candy and peanuts to pass around the campfire. 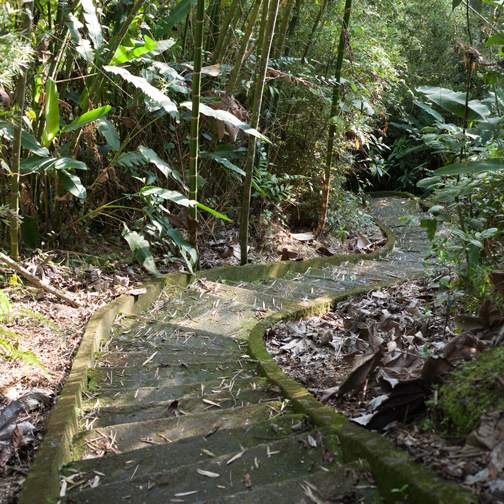 Once a large enough group had assembled, the main speaker introduced himself. He wore loose jeans and a white shirt that stretched across his belly. Because he had been a priest for twelve years, what followed was a very bizarre blend of mysticism and Catholicism.

After recounting a moment where he had been dragged back to earth after flying through a rainbow-colored tunnel towards the gates of heaven, the speaker turned the conversation to one of the most dangerous markets in Manizales.

La Galleria is famous for its cheap deals and rough atmosphere, but it apparently is also known for its witch market. Concerning this, I learned that casual sex is dangerous because socks and underwear can be compromised. Anyone with bad intentions could wash said items and use that water to make manipulative potions.

And what would be the best method to avoid this? This is obviously where Catholicism came into play as the answer was to avoid sex.

Scopalmine- aka Devil’s Breath- was also mentioned and it’s a much more credible threat because it actually a drug that erases memory and turns people passive and acquiescent. In fact, it was used during the cold war as a truth serum.

Scopalmine resembles cocaine but it need only be blown into one’s face for the drug to take effect and the victim to be susceptible to outside influence. It can also used for the infamous paseo millonario– which is when friendly strangers drag you arround town for a quick visit to all the best ATMs.

The discussion got even more interesting when the floor opened up for a Q&A. I had taken it for granted that all the others were as skeptical as me, but I soon realized I was wrong. Not only was the audience all ears, but they started asking some wacky questions. Do babies have a direct celestial connection to God? -They do.

Why don’t the babies remember their direct celestial connection? -They grow up.

What colors are in my aura? -White, grey and red.

About two hours into the evening there was a ten minute break after which the speaker was going to attempt to call up a spirit. My friends and I decided to leave because as a rule of thumb, we only like to raise the spirits on the weekend. And we were hungry.

The campfire stories were not at all like what I was expecting, however it was interesting to experience the superstitious side of Manizales. I don’t think I will ever look at dirty bras the same way. 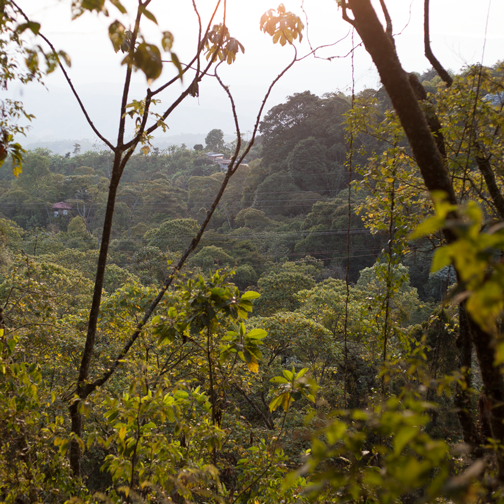 How to get to Ecoparque Regional Alcázares-Arenillo: Catch a blue buseta that lists La Aurora as a destination. Get off at Calle 5 & Carrera 22 – this is just outside downtown Manizales and the Plaza de Toros.