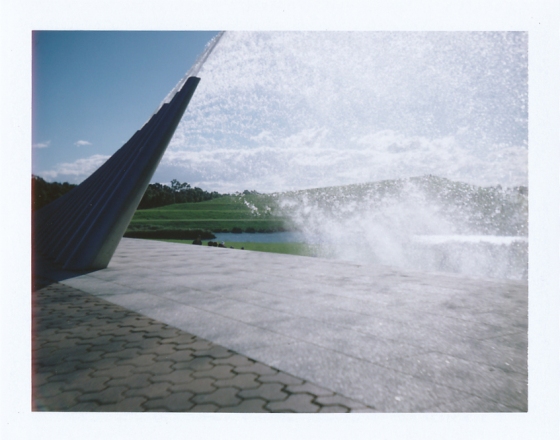 “They got lolly showbags n’ chip showbags,” the security guard listed off. He had dark blond hair, bronze neck and forearms, and a thick accent like Crocodile Dundee. I was pretty sure he wasn’t from Sydney.

“Where’s the train station?” I began to ask, but he didn’t hear me. He was still on a roll.

“The Easter show is only once a year and it’s a good chance for the city folk to see horses, n’ chooks, n’ roller coaster rides. If you’re still around in two weeks… Well, I’d recommend it.”

We were standing just outside the stadium complex in the heart of the Sydney Olympic Park. In the middle of the street was a booth with temporary road blocks in front. From behind the barrier we could hear the squeal of animals and the beeping of reversing semi-trailers. The metal skeletons of carnival rides poked up in the horizon.

Because the park was created for Olympics, it felt utilitarian. There were no botanical gardens or reading sunbathers, instead there were bike trails and manicured archery lawns. It was also a lot quieter than I expected for a warm Sunday afternoon.

The security guard rattled off a few more types of showbags before pointing us in the direction of the Olympic memorial statues. The showbags seemed like they were an important part of the carnival, but I was a little baffled why he though they were such a selling point for two adults.

Unlike the swag bags I have picked up at shows and conventions, lolly showbags were marketed to a slightly younger crowd and they weren’t even free. They were completely covered with cartoon characters and bad fonts, and only partially filled with cheap candy.

“Thanks for the info,” we replied before heading for the ANZ Stadium. On the way we passed a fountain made from metal rods. The water arched over a pathway and splashed into a pool below. At the edge of the rectangular pool was a hill shaped like a spiral.

Barret arched an eyebrow at me.

“How could that guy talk about lolly showbags when this fountain was just down the road?”

How to get to the Sydney Olympic Park: CityRail train to Lidcombe Station, transfer to Olympic Park train line. Alternatively- take a train to Concord West and walk from the station to the park.